YouTube raked in more than $15billion in ad revenue last year according to a first-of-its kind report from the video-streaming platform’s parent company, Google.

According to Alphabet – the parent company of Google which gave a report of its earnings on Monday – YouTube’s ad revenue rose from $8.1billion in 2017 to $11.2billion in 2018, before topping $15billion last year.

That figure does not include subscriptions to YouTube’s TV service and other revenue streams, which CEO Sundar Pichai said brought in another $3billion in 2019. 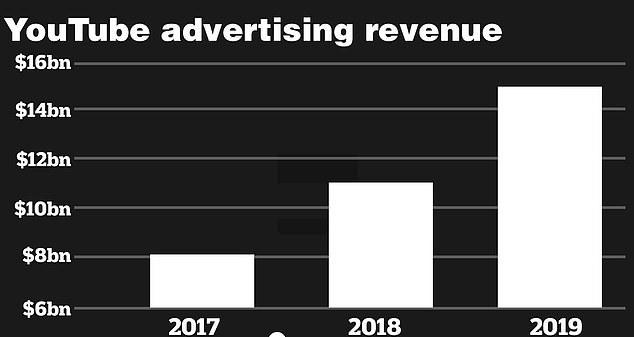 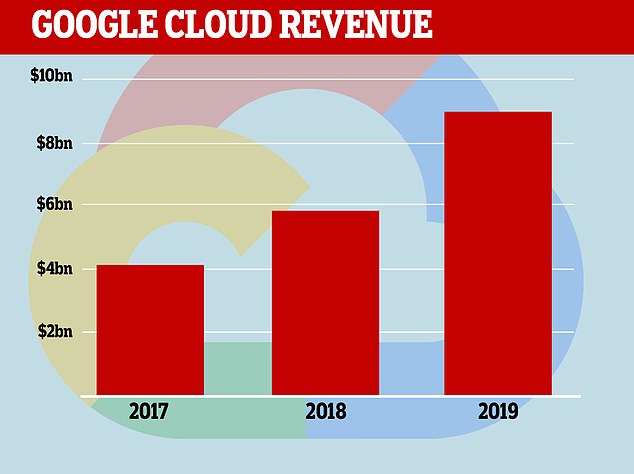 Google also revealed revenue from its Cloud service for the first time, seen as a key growth sector, which showed it has more than doubled in the last three years

Google also revealed it earned $8.9billion from its Cloud service last year, the first time it has revealed that figure.

Speaking about the YouTube earnings in a subsequent call, chief financial officer Ruth Porat pointed out that Google does not keep most of that ad revenue and instead pays out most of it to content creators.

As noted by The Verge, the figures make YouTube’s ad business about one-fifth the size of Facebook’s despite making up about 10 per cent of Google’s overall revenue

In addition, YouTube generated about $750 million in subscription and other non-advertising revenue, Pichai said.

Though the figures show the success of YouTube since its nascence as a platform for fledgling vloggers, financial analysts said YouTube’s ad revenue figures were underwhelming.

‘YouTube is smaller than generally assumed, but on the flipside, search seems to have accelerated and is growing faster than feared,’ said James Cordwell, analyst at Atlantic Equities.

The news also riled concerns among investors about whether Google’s dominance will last as U.S. antitrust regulators investigate Google and as Amazon and Facebook continue to grow their ads businesses globally.

Google has blamed foreign exchange rates and one-time product changes for recent lapses from the 20 percent revenue growth investors had grown accustomed to from the company.

Google also faces internal challenges as some of its 119,000 employees have resisted working on weapons-related software for militaries or censored search products for Chinese users, leading Google to abandon such efforts.

Others have expressed frustration with curbs on company-wide discussions and what they have described as retaliation for labor organizing.

Minority walkout triggers a tweet from German Ambassador to Ghana

Stephen Appiah - October 17, 2019
0
Patrick Day has died at the age of 27, four days after suffering a head injury during his super welterweight bout with compatriot Charles...